Solo Backpacking Is All About Heart & Soul

Everything else
Trails less travelled
By Dustin Walker

Survivor Man star Les Stroud never seems fazed when he’s on the verge of starvation. The guy’s a pro, after all.

But watch the show long enough, and you’ll find out what really gets to this survivalist superstar – it becomes clear the moment he pulls out his harmonica and plays some melancholy jazz tune.

The Survivor Man is sick of being alone.

You can train your body to endure physical stress, hunger and the elements, but training your emotions to endure loneliness, well, that’s a different story. And perhaps this a major reason why even some the most experienced outdoor explorers don’t make extended solo backpacking trips a habit.

And yet, there’s a certain thrill that comes with being totally isolated in the backcountry. A kind of freedom. I’ve never tackled a solo trek myself, but the idea has always nagged at me.

Trekking on your own does bring extra danger. But if you’re a seasoned backcountry hiker, with enough skills to confidently handle yourself without a trail posse, backpacking solo really becomes a mental game.

“Without a doubt the hardest aspect of a longer solo hike is mental, not physical,” said writer and PR professional Scott Barker, who spent 29 days hiking Vermont’s Long Trail last year. “Knowing how to manage your attitude before setting out is crucial to success.”

But it’s not all hardship. Hitting the trail all by your lonesome can also be great for the soul by offering an emotional release and an unmatched sense of accomplishment, according to a few adventure bloggers.

Time to reflect and put things in perspective

Things get deep when it’s just you and the trees.

As detailed in this essay on hiking solo, being completely alone in the wilderness allows a certain “cognitive freedom.” You can be your true self, independent of modern noise or the influence of even a single hiking partner. All decisions are your own. And that creates an ideal environment for meditation and self-reflection.

Barker certainly took time to reflect on life during his impressive 29-day trek. 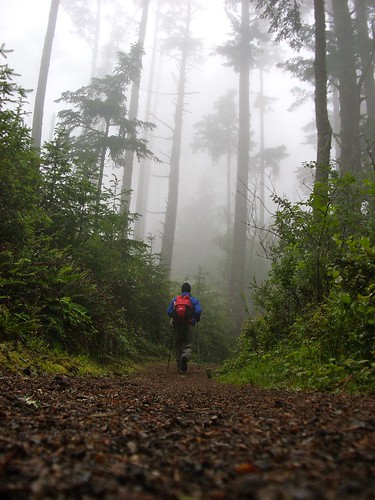 Backpacking solo can be a time for deep reflection. Photo: ben klocek CC

“I went into the woods after losing my Dad to cancer, losing my job and ending a 25-year relationship. I needed to clear my head and being alone in the wilderness gave me the space and time to do that,” said Barker, who shares detailed stories about his Long Trail experience on his blog Freelance Trekker.

“After going through so much turmoil I think the solitary hike allowed me to see past the drama of recent events and reconnect with myself on a basic level. I re-learned that I am a very lucky person and that I have had a blessed life, even if the road had recently been rocky. I don’t know that I would have gained that perspective in any other way.”

Other trekkers can relate to Barker’s experience.

Neil Fahey, an Australian writer who runs the popular Bushwalking Blog, has tackled a handful of solo backpacking treks. He’s also embraced the emotional freedom that comes with hiking alone.

“There’s nothing more conducive to self-reflection than being alone in nature,” Fahey said in an e-mail. ”It gives me time and space to process complex emotions, or to just be still and meditate, depending on what I need at the time.”

He suggests that hikers experiment with ‘mindfulness’ to get the most out of their trip.

“When people think about meditating they picture themselves sitting cross-legged and chanting… It doesn’t have to be this way. You can meditate while you walk, by just trying to focus on aligning your breathing with your footsteps, and not letting your mind focus on anything else,” said Fahey.

Even a little bit of solo time in the wilderness can be emotionally healthy. Molly Hucklebridge, Environmental Education Director with the American River Conservancy, told S&TT in April that she has been taking inner city youth in L.A. on ‘night solo sits’ since 2010.

After a guided walk through the dark, the youth are left to sit by themselves in the woods. This helps the young people re-connect with themselves.

“These days there are rarely moments when students are truly alone – free from friends, electronics, cars, or other distractions,” said Hucklebridge.

Sometimes when you’re alone, and the mind is free to wander, troubling thoughts can creep in. Just as self-reflection comes more easily while trekking solo, fear may not be far behind. 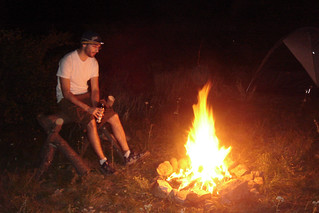 For many people, solo backpacking is especially challenging at night when there are fewer distractions and your mind can wander.

“Naturally, one’s imagination starts to think of worst case scenarios, but being alone I kept re-focusing myself on all the positives of doing the hike by myself,” said McAdam, who recently tackled a three-day solo trek at Cape Chignecto Park in Nova Scotia, Canada.

“Don’t let your fears play a major role in the trip. Acknowledge them and then put them out of your mind so you can enjoy your surroundings.”

McAdam refers to the inspirational story of Cheryl Strayed, who at age 22 trekked 1,000 miles of the Pacific Crest Trail solo. Strayed details her experience in the 2012 book Wild.

“Even though it pales to what other women have done on their own … (my solo trek) did give me great confidence in myself and a kick-ass kind of feeling,” said McAdam.

As for me, I’m still pondering whether I’m up for delving into the wilderness alone. I know it’d be a thrilling experience, but something tells me I’d be playing that melancholy harmonica a little too often.

What do you think?

Have you ever tackled a solo trek before? If not, do you think you’d ever be up for one? Share your thoughts in the comments below.

Dustin Walker is a journalist, travel copywriter and editor/owner of Slick and Twisted Trails. Follow him on Twitter @dustinjaywalker

I did a couple nights in the Arc Dome Wilderness out in central Nevada by myself. I could’ve stayed another night had I not told people I’d be back. I had my 2 dogs with me, and I ran into a couple people on the trail, but other than that, it was pretty quiet. The solitude really helped me work out some problems I had been having. All the noise in my life faded away, and allowed me to realize and focus on the one thing that was important. It was also a real confidence builder. I plan to do it again sometime.

Sounds like it was pretty cool trip. I’ m getting the sense that trekking solo with dogs is the way to go. Thanks for dropping by.

Great read. You should get dog Dustin.

Hey Shon – that’s not a bad idea. I just need a bigger yard.

Thanks Leigh. I really appreciate you providing some insight for this story.

Hi Dustin, Thanks so much for soliciting my input. You’ve done a great job putting this blog together.

Just so you know…

This site is an Amazon Associate. That means when you click on a link and it takes you to the Amazon.com site, I’ll make a commission if you buy something. This revenue keeps the site running.